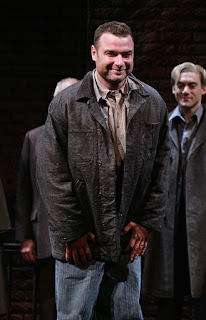 . After much Strasberg and Stanislavsky over the years, it's refreshing to absorb such an unfettered and modern take. I love the fact that Mamet intros by saying he started out as a not-so-great actor. He recognizes the Actor's contribution. So many times, when reading the thoughts of Directors, it feels like the Actors are no more than spoiled children that must be tolerated.

There are many things he says in his book which are irrefutably important and need to be said. I've listed my 10 favorite. Of course now, for me, Liev is Theatre, making this connection symbiotic. I'm not sure if Liev and Mamet know each other, but to me some of these specific remarkes absolutely quantify and qualify Liev's innate abilities and contributions to his chosen profession.

Don't get me wrong - Mamet makes his usual rant against Method and warns us of the dangers in over-intellectualizing a part (by being highly intellectual, himself, of course.) GREAT FUN!

I made a note of these as they appeared in the book so they are in no particular order of preference for me.

1) "Actors never forget that which most Directors never realize: The purpose of staging is to draw the attention of the audience to the person speaking."

2) "In 1967 there were seventy-two new Broadway plays produced. In 2009 there were forty-three, half of which were revivals. For an average play to re-coup its investment, it must run fifteen weeks at near capacity. That is to say, it must 1,200 seats at an average ticket price of $77."

3) "The work of the piece should be done by the Writer, freeing the Actor to play."

4) "The Audience, when moved, is moved on a preverbal level. It is not involved in sharing the ideas of the drama, but rather experiencing the thrill of the communal hunt."

5) "We use a different part of our brain to actually appreciate drama. We civilized folk use it seldom and we love to exercise it. Go to a theatre and feel the audience enthralled in a play. One can feel it backstage, and with one's eyes closed - a physiologic change is taking place though communal absorption."

6) "Simplify the process to allow the talented to thrive, hate like the plague any direction that makes the artist self conscious, and end every rehearsal on a note of happy accomplishment."

7) "Talented Actors must be dealt with gingerly. To begin, they are the recipient of a gift which must be respected and which is, in the largest measure, out of their control."

8) "In great drama we recognize that freedom may lie beyond and is achieved through the painful questioning of what was before supposedly unquestionable... We are pleased to find ourselves able to revise our understanding."

9) "The more pernicious of the directorial depredations is the denigration of the text, that is the assertion that the text has no meaning or, at best, has only the meanings the director choses to imbue it with."

10) "The mystery in Drama is time. The reflection of this intolerable burden, our human speciality, is the goal of the religious mystic, the yogi, the lover and the drug addict - to live in a world without time and achieve unbeing."
Posted by Alyssa at 8:52:00 AM 6 comments: