His and Hers and Ours?

You've stopped humming.
I liked it when you hummed.
- Glenn 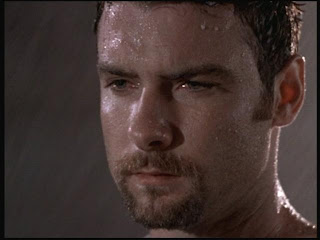 - Contains Spoilers -
There are hundreds of tomes out there about audiences and who goes to see what and why. Armchair film academics such as myself inhale this stuff like oxygene.  We're easy to spot - I'm the girl on vacation in Vegas reading Open Wide by the pool.

I'm not a bitch and I feel sure no one who knows me would call me a snob either. But, there are only so many hours in a day. And films ARE personal. When it comes to this stuff, I've gotten to the point where I can tell if I should be engaging simply by a person's Netflix requirements. Allow me to demonstrate:

A) Potential:
Me: Hey, do you have Netflix?
Brutha from Anuthah Muthah: Yeah. Did you see they just added the Director's Cut to Last Tango in Paris?

B) Fugget-about-it:
Me: Hey, do you have Netflix?
So-Not-Me: I was thinking of getting it but my brother-in-law's on there and he says it's all old stuff.

Now, if you fall into Category B allow me to just stop you right here. I'm going to do the unthinkable and let us both off the hook: this post and in fact probably my whole site is just a waste of your time. I'm inciting dialogue from like-minded participants who know (or want to know) the difference between John Cassavetes and John Hughes. I feel you may be looking for something a little more like this.

Group A? Let's dig into that largely unexploited goldmine I like to call The 1990's sympaticomedy. We'll be making a few stops at Liev-ville along the way.

Which came first, the Egg or the Chicken-in-the-one-where-Monica-cooks-chicken-for-thanksgiving-because-Chandler-hates-turkey? Who cares - as long as our hair looks adorably low-maintenance while we're trying to figure it all out.

Was there anything better than being in your twenties in the 1990's? Seattle bands and cozy flannel aside, the 90's let us know it was okay to blow an entire day on pursuits of complete and utter avarice, like hunting down the perfect cup of coffee. They spawned such classics as Reality Bites and Singles, which paved the way for some lesser known journeys of self discovery, like Walking and Talking, Daytrippers, Party Girl, Denise Calls Up and His & Hers.

We love these films and more importantly we feel possessive about them because those times are SO long gone. We yearn for it. Today, finding the perfect cup of coffee is not so much about time suckage, but rather the carbon footprint we leave while driving around looking for a cute place. We want the decor to be very now, even though we never once actually sit down. By the time we discover our Global-Java-Spa (fair trade beans and osmosis water only), select our my-condiments-define-me accompaniment and choose the size of our 100% recyclable vessel, we're already feeling self-rightious and vindicated. How the shit tastes anymore is the least of our concerns.

Carl is, and I'm not being biased here, the most interesting character in The Daytrippers. Liev's take dissipates some of the stench that would normally come with Carl's desperation. Any one dimensional actor would have made him the guy you love to hate. Every road trip movie needs one of those. Instead, Carl's someone you could actually spend a New York Day squished in the backseat of a cold car with.

For maybe 75% of Walking and Talking

Gerry of His and Hers should be the bad guy as a philandering, sex-deprived husband who's lack of sympathy towards his pregnant wife's plummeted libido leads him straight into the arms of her best friend. But with faceted Liev at the helm, and the always-sharp Ginzu knife, Gerry's the misunderstood husband with the heart of gold.

, with a compelling story and known actors like Liev and Helen Hunt, would have been a sleeper that became film bread & butter. Today it's an indie on limited release that's gone straight to video.

Meanwhile the Studio Fat Cats are off trending who will score Shrek 26, since both Randy Newman and Elton John aren't exactly spring chickens.

I guess I still have a lot to learn about Hollyweird if that continues to shock me.
Posted by Alyssa at 2:55:00 PM

Email ThisBlogThis!Share to TwitterShare to FacebookShare to Pinterest
Labels: Liev Schreiber 1990's Every Day Walking and Talking Party Girl His and Hers Daytrippers Party Girl www.lievschreibrconnection.com